Other than a complete clog, I don’t think there is a more annoying toilet problem than a slow flushing toilet. Anxiety (and frustration) rises every time that flush handle is pressed and the water level doesn’t go down. Luckily, there are some pretty straight-forward reasons this might be happening and we have 8 tips on how to fix a slow flushing toilet. Let’s get to it!

It is the pressure of quick flowing water that ultimately empties the toilet bowl of waste. Water that is held in the tank is released and flows quickly into the bowl to push the water and waste past the trap and into the sewer drain. Some of the strongest flushing toilets actually pressurize the water in the tank, increasing that water flow even more for a more powerful flush.

If the water pressure is too low it doesn’t flow fast enough to create the ‘push’ needed to get the waste past the trap. Often this means the waste doesn’t clear adequately resulting in multiple flushes to get the job done.

Ultimately if the outflow of the toilet is blocked in any way toilets will flush slowly as they try to push waste past the blockage. While sometimes drains and traps clog all of a sudden (such as when wads of toilet paper or childrens toys are flushed), most of the time it is a slow build up of waste matter that causes the problem.

Even a small narrowing of the trap or drain pipe can cause your toilet to flush more slowly than you would like. In these cases, increasing the water pressure or flow speed may solve the problem temporarily but it is not the solution to the problem.

Toilets are, except for the most modern smart toilets, entirely mechanical machines. They rely on parts to work together systematically to produce a flush and then refill ready for next time. All mechanical parts degrade over time. They become loose, or wear down, or just outright break. The parts specifically responsible for releasing water can be the culprit when looking to determine the cause of a slow flushing toilet.

How To Fix A Slow Flushing Toilet

Regardless of the reason why your toilet is slow flushing, remember that it is the pressure of flowing water that removes waste from the toilet bowl. These 8 tips on how to fix a slow flushing toilet all work to ensure that the water is flowing as quickly and optimally as possible.

1. Hold the flush lever down. 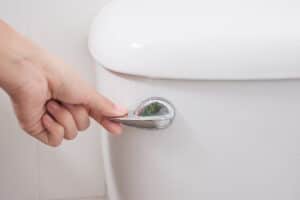 If the flush is not removing all the waste from the bowl, try holding the lever down until the tank is empty. If this quickly and easily solves the problem, then it’s likely the issue is within the mechanics of the tank and not with a blockage further down the line. 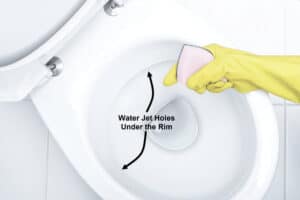 Regular cleaning will keep most water jet holes clean but, if you live in an area with hard water, you may need to remove the mineralization periodically to prevent build up and reduced water flow. 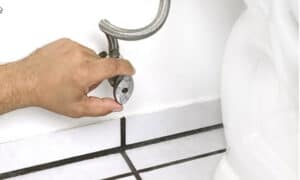 It seems obvious, but ensuring that the water valve at the back of the toilet is fully open is a good step to resolving a slow flushing toilet.

Sometimes, it’s just not open all the way. If you have little kids, it could be that they have found this valve and may have been playing with it. Either way, make sure it’s fully open and not contributing to the problem. 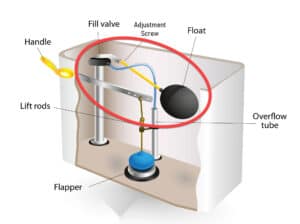 The tank float determines when water stops flowing into the tank to fill it up. It literally sits on the top of the water, rising as the water level rises after a flush. Once the tank float reaches the pre-determined height it triggers the fill valve to stop filling the tank with water. It’s a brilliantly simple mechanism.

Luckily, adjusting a toilet float is a very easy process. The float arm has an adjustment screw near the fill valve. Simply adjust the screw to allow the float to rise just a little bit more before turning the fill valve off. This will allow the tank to fully fill with water.

If you find that the float, or the float arm, are damaged in anyway and are not working correctly, then you may need to replace the float. This is easily done and there are many float replacement kits available. 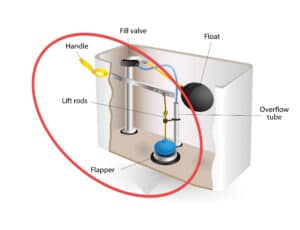 The flapper is the ‘plug’ at the bottom of the toilet tank. It is lifted when the toilet flush handle is pressed, opening the drain and allowing water to flow from the tank to the toilet bowl.

When the flapper doesn’t open all the way, or quickly enough, it will affect the flow of water down into the toilet bowl.

If the flapper is degraded, or broken, then it will need replacing. But, often times it just needs an adjustment so that it opens more quickly and fully. 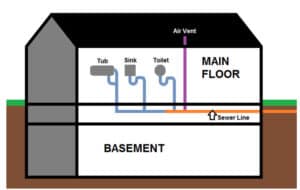 There must be an air vent (or drain vent) in order for water to flow effectively in plumbing pipes. If the drain vent becomes clogged it can affect the flow of water through the pipes resulting in slow toilet flushing as well as slow drains throughout the house.

This is not a simple DIY project; contact a professional plumber to help if you suspect that the drain vents are an issue. 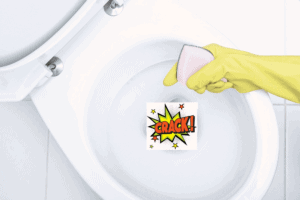 Cracks in the toilet bowl can allow water to slowly seep out, lowering the level of the water that sits in the bowl. When water is released from the tank during flushing, it is depending on there being a minimum volume of water in the toilet bowl already so that it can push the water and the waste through the trap and into the drain. If the toilet bowl does not contain enough water then the whole process is slowed down.

Hairline cracks above the waterline may not cause an issue; but should be watched for any lengthening or deepening that may reach into the water area. You can attempt to slow these down with

Cracks below the waterline are almost surely causing a problem – and will only become a bigger problem as time goes on. In these cases, the toilet should almost certainly be replaced as the issue will only get worse, possibly resulting in water damage. 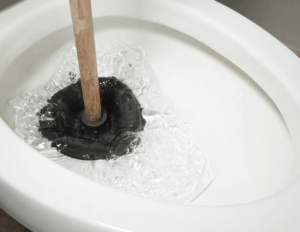 The last obvious solution is to ensure that the outflow drainpipe isn’t clogged. If the waste cannot exit the toilet bowl it will appear that the toilet is flushing slowly.

The only real way to determine if the trap or the drain is clogged is to look with a camera. Of course that isn’t realistic for homeowners. The next best step is to try out some de-clogging methods to see if that resolves the slow flushing issue.

There are a few DIY options to ensure that the trap and/or drain pipe are not clogged.

Toilet plunger. Every household should have a toilet plunger at the ready. Do you know there are two types of plungers? One for sinks and one for toilets; although there are also combo options available. Toilet-specific plungers have a special flange that is inserted down into the toilet drain. This helps to seal the plunger and direct the force of the plunging action down into the pipe.

Baking soda and vinegar. This is a simple solution using two common kitchen ingredients. Baking soda and vinegar combine to create a powerful fizzing action that can dissolve simple clogs, including the generalized build up of minerals in locations where hard water mineralization can be an issue.

Warm water and dish soap. Regular dishsoap (not dishwasher soap) can help eliminate toilet clogs as it seeps down to the clog and offers some lubrication for the flushing action to work with.

Epsom Salts. Epson salts work similarly to the baking soda and vinegar solution by producing a fizzing action that can dislodge a clog.

Wire clothes hanger. If non of the non-mechanical methods are working then a more manual approach may be needed. It may not be pleasant but neither is a slow flushing toilet.

Toilet snake. Toilet what?? A toilet snake is the ultimate manual, mechanical toilet clog remover. It can reach, and break up, clogs that are farther down the pipe. They are hugely effective.