Knowing how to flush a toilet with no water isn’t rocket science, but it’s not something we think about every day. Unless you’ve spent time at a rustic cabin, or a lakeside cottage, or perhaps were a Girl Guide or Boy Scout in your youth, there usually isn’t reason to have such a skill. As with all great life skills though, learning how to flush a toilet with no water before you have no water will help save time and frustration when the time comes.

If you have landed here because you really don’t have any water and just want to know what to do…click here to quickly learn how to flush a toilet manually. 🙂

How To Flush A Toilet With No Water

To be clear, we’re talking about no running water. We’d have to be a whole lot more resourceful to manage waste with no water at all.

One of the things to realize about how toilets work is that they function entirely based on water pressure. Well, except for ‘smart toilets‘ and those with pressure assisted flush; but even these, ultimately can be flushed manually. While the toilet may have revolutionized the sanitary situation a few centuries ago, it’s still based on the same simple technology relatively.

How Much Water Does It Take To Flush A Toilet?

If your toilet is relatively new then it likely needs about 1.3 gallons of water to completely remove waste and replace the water in the bowl. In 2014 the Environmental Protection Agency (EPA) outlined the WaterSense Specifications for Tank Type Toilets. It states that ‘effective flush volume shall not exceed 1.28 gallons‘; a relatively modest amount of water, and what most toilet manufacturers today adhere to.

If your toilet is older then it may need much more. Typically toilets produced before 1982 need between 5 and 7 gallons (!). Toilets manufactured between 1982 and 1993 probably use 3.5 gallons. And modern toilets are in the 1.6 gallon range.Reference

How Many Flushes In The Tank?

While the running water at home (or at the cabin, or at the cottage) may be interrupted, it doesn’t mean that your toilet is immediately without water. The toilet tank always holds enough water for at least one flush, and sometimes more.

A typical toilet tank holds between 2 and 7 gallons – a pretty wide range, but generally enough for a flush or two. If you use the water in the tank to manually flush the toilet instead of using the normal flushing mechanism, then the water may last 2 or 3 flushes.

If It’s Yellow, Let It Mellow

No-one disagrees that solid waste should be flushed immediately, but liquid waste doesn’t necessarily require the same protocol. Urine from healthy individuals is sterile; meaning that it has no harmful bacteria in it. This means that leaving it in the toilet bowl for a while poses no health risk.

Urine does, however, contain several chemical compounds that can be smelly as they break down and interact with each other. This isn’t dangerous as much as it’s unpleasant; you’ll have to balance the amount of liquid waste with the amount of water you have and the ‘smell factor’ to determine the best flushing frequency.

The old adage of ‘if it’s yellow, let it mellow’ holds true and can definitely help when flushing water is in short supply!

If you’re suddenly out of water at home then it’s likely that you don’t have any water stored for just such an occasion. If you’re at the cottage or cabin though, there are things you can regularly do to save water for toilet flushing.

Reuse Water. Save the water that is being used for ‘lighter duties’ – such as shower water, dishwashing water, or veggie cleaning water. Keep a cistern nearby for this and you’ll likely always have plenty of water for flushing.

Collect Rainwater. Rainwater is a natural resource that can be harnessed for home use. It’s easy to collect; simply place a rain barrel under the downspouts from the gutters and wait for it to rain. Use the water for everything from flushing toilets, to watering gardens, or doing dishes.

How To Flush A Toilet Manually

It will take as much water to manually flush a toilet as it takes to normally flush the toilet. So, if you have an older toilet you’ll need more water than if you have a newer model.

The secret to manually flushing a toilet is to start pouring the water slowly to get it started, and then drop it in more quickly to flush the bowl of all waste.

This ‘How Things Work’ video demonstrates how the toilet plumbing will simply absorb a small amount of water added slowly, but will flush if a larger amount of water is added relatively quickly. 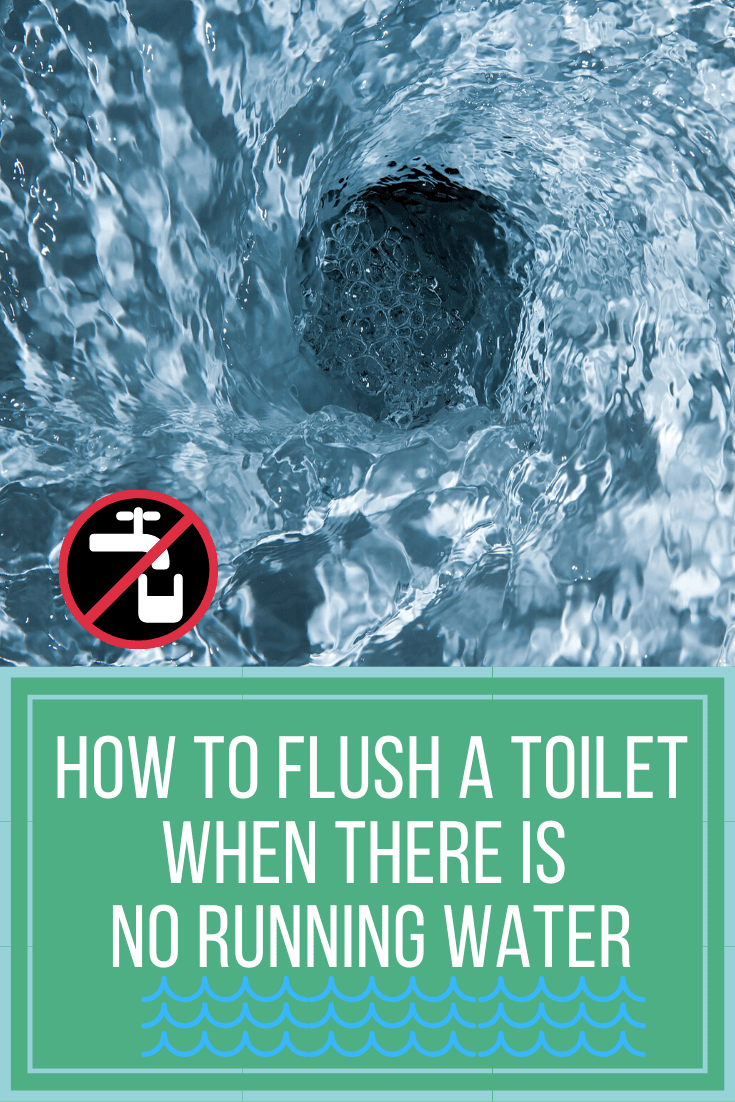