I’m betting that thinking about how toilet flushing systems work is not something that comes to top-of-mind often. We tend to think of toilets as the most basic of fixtures in our houses, and in our bathrooms. It’s not until it’s not working properly, or needs replacing, that we think of the inner workings of that toilet; and then, the different toilet flushing systems become very important.

11 Toilet Flushing Systems (Some You Probably Didn’t Know About)

At its most basic, a toilet flushing system drops water into the toilet bowl, forcing the waste in the toilet bowl up through the trap and down into the sewer drain. All modern toilets work on this basic premise; whether they are super sleek smart toilets or simple squat style toilets.

Modern technology has allowed improvements on this basic design and while many, if not most, toilets still work in this way there are 10 more toilet flushing systems to know about. 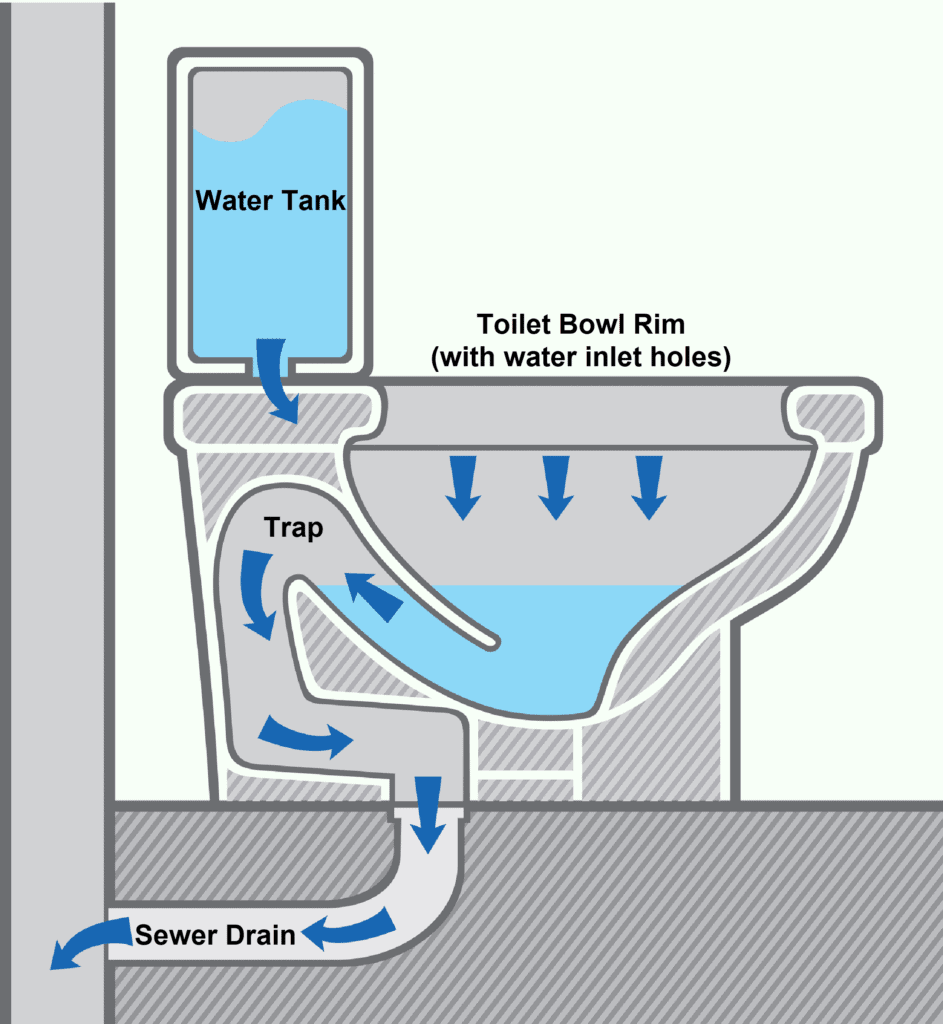 Gravity flush toilets use only gravity to flush the toilet. This is the old-school, original principle in toilet flushing systems. It’s a super simple system designed to remove waste and prevent sewer gas from backing up into the toilet, and the bathroom.

Once the bowl is cleared, the remaining tank water fills the bowl with fresh water again. You can see in the diagram above that the trap keeps water in the bowl and creates a natural seal from any gases coming back up into the toilet.

While most toilets still work on the basic gravity flush premise, these toilets are also prone to slow flushing, incomplete flushing, and clogging. They also tend to use more water than is acceptable according to current EPA standards.

Over time, manufacturers experimented with various design changes to increase the flushing power of gravity flush toilet systems. One of the simplest modifications was to change the dimensions of the trap.

This results in a much more powerful, and effective flush. 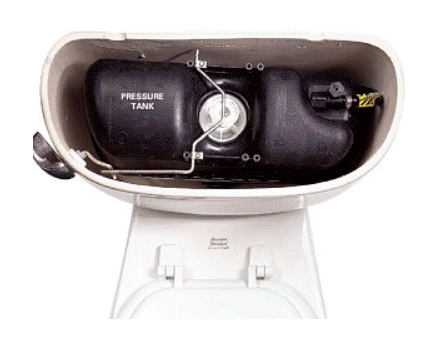 This toilet flushing system works exactly as the name indicates. The water in the tank is pressurized. When the flush handle is pressed, the water is released much more quickly and powerfully than in a straight gravity flushing system toilet.

The increased pressure and speed move the water (and waste) through the toilet bowl and into the trap creating one of the most powerful flushing systems. These types of toilets typically don’t clog; the strong flushing power ensures that all waste is removed.

The downsides of a pressure assisted toilet are noise and maintenance.

This increases the water flow, pushing the water (and waste) down into the siphon at the bottom more quickly allowing the siphoning action to then take over and pull the water and waste completely from the bowl.

It’s a simple modification but it really works.

A hybrid of the siphon flush and pressure assisted flush systems. The vacuum flush also uses an inner chamber to hold the water but it is not, in itself, pressurized. This tank is attached to the trapway at the bottom of the toilet bowl.

When the flush lever is pressed, water begins to leave the inner chamber creating a vacuum that is directed to the trap, effectively multiplying the siphonic effect and increasing the power and effectiveness of the removal of water and waste from the toilet bowl.

The downside here is that it is a newer innovation and is not yet widely available through all toilet manufacturers. 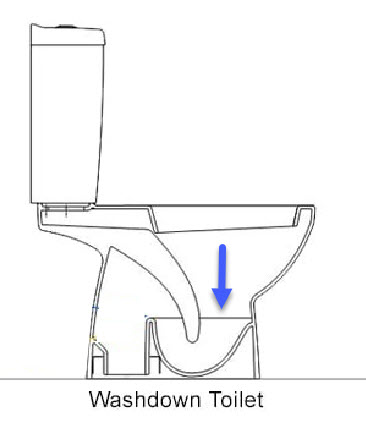 Washdown toilet flushing systems basically are gravity systems on steroids. 🙂 These toilets are more common in Europe (along with the ‘Shelf Toilet‘); it’s likely you won’t see many here in North America.

These toilets have a smaller, and deeper, ‘bowl’ portion. So waste drops into a much smaller area in the toilet bowl. The trap itself is also much shorter and is shallower. This means that water coming from the tank drops directly to the bottom of the bowl and the water and waste quickly overflows the trap and into the drainpipe.

Effective, but it also results in a less clean toilet because there is less water for rinsing.

Any toilet can technically be a low water flush toilet. It can be as simple as placing a couple of bricks into the tank of your existing toilet, or lowering the float level so that the tank doesn’t fill all the way. This may not always be effective though, as most toilets don’t work as well if the optimal amount of water is not used.

Low water flush toilets generally utilize combinations of siphon, cyclone, and pressure assist to help remove waste while using the least amount of water. Typically, low water flush toilets use between 1.6 and 1.8 gpf (gallons per flush). Check out the specifications of toilets to learn more about how much water they use. 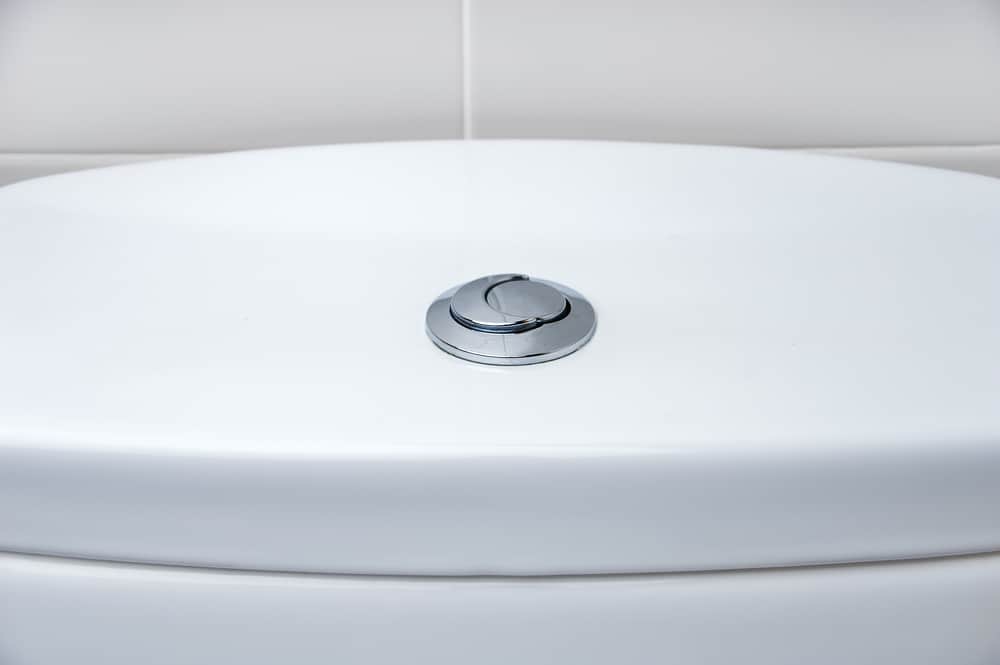 I’m sure that most people have seen, or used, a dual flush toilet. Dual flush toilets allow the user to select whether the toilet does a ‘partial’ or ‘full’ flush.

Typically there will be two flush buttons – or one button split to represent a larger and smaller section. The smaller button creates a partial flush; used for liquid waste when using a full tank of water is not necessary. The larger button creates a full flush that uses the full tank of water and completely evacuates the toilet bowl; users select this option for solid waste.

The technology behind the flush can be any of the ones already mentioned. The only difference is the amount of water that is used.

These are almost exclusively used in commercial settings and work much like a pressure assisted flush. The difference is that there is no water tank involved. These toilets are plumbed directly to the pressurized water pipes. When flushing is initiated, water is forced directly into the toilet bowl creating a fast and powerful flush.

Upflush toilets are exactly as named; instead of the toilet flushing and the waste and water being directed downward into the plumbing and sewer system, the flushing action flows out the back of the toilet and upwards into a macerator and outbound pipe.

It is the pump and macerator that make upflush toilets possible. Upon flushing, the pump takes the wastewater from the toilet bowl into a macerator unit. Essentially a blender, this macerator breaks the waste down into a slurry which can then be easily pumped through a narrow pipe connected to the black water system and out to the sewer or septic field.

So, while a water source and discharge pipe are still required, the need for an in-floor drain is eliminated which means an upflush toilet system can be installed almost anywhere in your home. These are popular when bathrooms are installed in basements or below-grade situations.

The last of the toilet flushing systems doesn’t have a flush at all. I wanted to include it because there are many situations where a traditional flushing toilet may not be possible, or desirable.

Composting toilets have benefited greatly from ongoing research and development recently. If you think of a composting toilet as a smelly, undesirable, necessity then you have not used a modern version.

Modern versions are clean, practically odor-free, low-maintenance waste handlers that can fit in a variety of environments. Some of the composting toilets I have seen (and used!) have been far cleaner, more sanitary, and way less smelly than most public toilets I have had to use!

While composting toilets are now being installed in some eco-friendly houses, most often you will see them on boats, in RV’s, and at the cabin, cottage, or camp (whatever they are called in your neck of the woods).